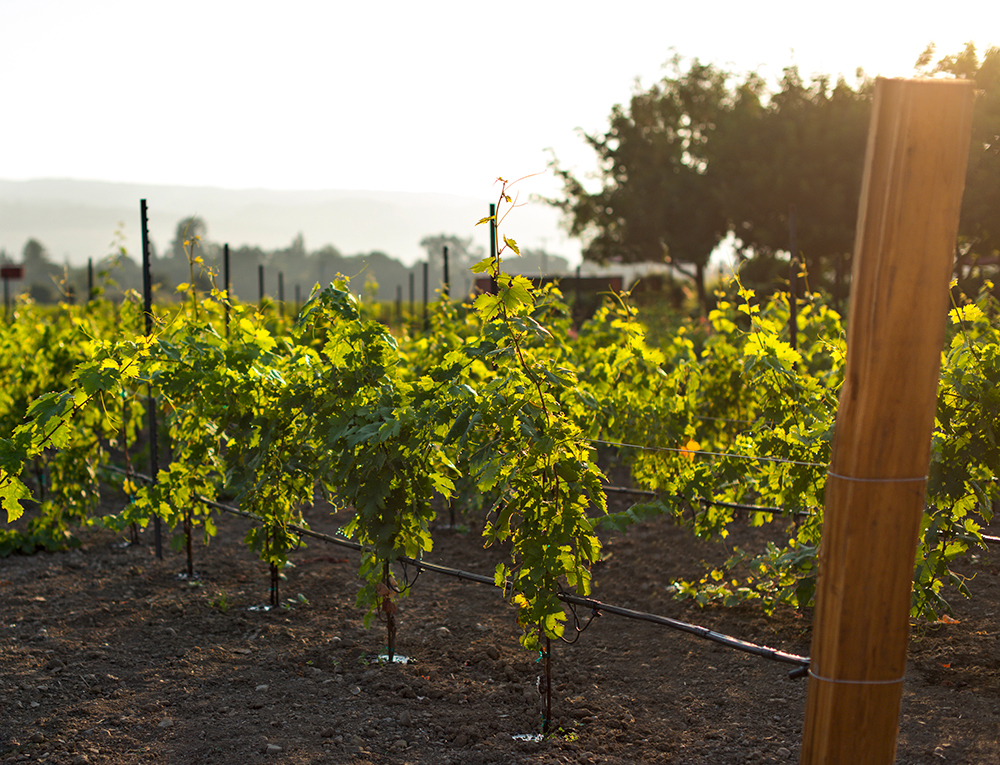 In the spring of 2017, Rodney planted a vineyard on his property. Work session teams frequently ask questions about the vineyard, its yield, and winemaking in general, so Rodney prepared information to educate folks about how grapes are grown and wine is made. Keep reading to learn all about Rodney’s vineyard, or download the PDF.

From vine to wine

Just what does it take for a grape to become wine that lives up to Napa Valley’s reputation? Follow the life cycle of a grape from vine to wine, starting in the heart of winter when vines are dormant:

1. Winter pruning: Pruning is a highly skilled vineyard practice. One purpose is to guide the vine in certain directions on the trellis.

3. Flowering: After a month or so of vegetative growth, a vine will develop tight bunches of tiny flowers. Each flower has the potential to form a single grape berry. When there is danger of frost at this point, vintners and growers take steps to protect the tender young shoots, including the use of large fans in the vineyards to circulate the cold air.

4. Fruit set: As the now-pollinated flowers drop their petite petals, a tiny green sphere emerges at the end of the stem. As these little grapes grow, bunches begin to take their familiar shape. With frost still a concern, vintners keep an eye on the weather on an almost minute by minute basis.

5. Canopy management: Eventually the vigorous shoot growth of springtime must be managed to ensure optimal grape production and ripening. Canopy management includes leaf removal, shoot thinning and shoot positioning. The goal is to achieve the perfect balance of shade, sunlight and air circulation around each grape bunch.

6. Crop thinning: Crop thinning refers to the dropping of unripe grape bunches that are not perfect. This is one of many ways that grapes in Napa Valley are purposely tended in order to yield only half the amount of grapes per acre compared to any other wine region in California.

7. Veraison: All grape varieties begin green in color. It’s not until mid-summer that red or white grapes reveal their identity. This period of grape pigment development is called veraison.

8. Harvest: This occurs by hand and often at night when it’s cool (better for the grapes and better for the workers). Harvest is from early August through late October or early November, depending on the variety.

9. Crush: Right after harvest, the grapes are gently crushed and fermented. Red wine grapes are first separated from their stems, then crushed and sent to a vessel (stainless steel, oak or concrete tanks) to ferment on their skins. It’s the grape skins (and how long the juice is allowed to be in contact with the skins) that gives red wine its color.

10. Fermentation: Fermentation is the process of yeast converting sugar-laden grape juice into wine. Zinfandel juice will often spend a bit of extra time on the skins after fermentation to round out the tannins and create the desired color and mouth feel in the wine.

11. Aging: Napa Valley winemakers use many techniques and materials to allow flavors to develop as the wine ages. Decisions on the use of stainless steel or French or American oak, how to strike the balance between the stronger character of new oak versus the more neutral qualities of previously used barrels, and innovative techniques such as aging in egg-shaped concrete vessels, all affect the flavor of the final wine.

12. Bottling: Determining when to bottle a wine is a very personal decision for the winemaker and is highly dependent on the vintage and character of the wine. For Zinfandel, it is not uncommon to age the wine in oak for 18 to 24 months, to allow complex flavors and aromas to develop.

Appellation – Defines the area where a wine’s grapes were grown, such as Bordeaux or Gevrey-Chambertin in France, and Napa Valley or Sonoma Valley in California. Regulations vary from country to country and state to state. For example, in California, to legally claim wine is from a certain appellation (also called an AVA, see below), 85 percent of the grapes used to make the wine must be grown in that appellation.

AVA (American Viticultural Area) – A defined geographical grape growing area that has officially been given appellation status by the United States Alcohol and Tobacco, Tax and Trade Bureau (TTB). Two examples of AVAs are Napa Valley and Sonoma Valley. In addition, AVAs can have specified sub-AVAs, such as Stags Leap District or Oak Knoll District here in Napa Valley, that are typically known for particular quality and growing conditions.

Clone – A group of vines originating from a single, individual plant propagated from a single source. Clones are selected for the unique qualities of the grapes and wines they yield, such as flavor, productivity and adaptability to growing conditions.

Old vine – Some wines come from vines that are 50, 70 or even 100 years of age, which yield small quantities of concentrated fruit and make a more concentrated and complex wine. Because this is an unregulated term, the wine can come from relatively young vines.

Rootstock – The lower part of a grafted vine that consists of the root structure of the plant. Selecting the proper rootstock for a vineyard and grape variety can influence disease resistance, vigor and yields.

Terroir – “Terre” means “land” in French. Terroir, therefore, is a French term meaning “sense of place.” More than that, terroir means that the flavor and character of a wine is directly attributable to the climate, geography and farming practices where it is grown.

Variety – A variety refers to the grape itself, whereas the term varietal refers to the wine made from that grape variety. For example, to describe the grape itself, one can say, “Zinfandel is a late-ripening variety that responds best to a longer growing season.” To describe a bottle of zinfandel wine, the term varietal is used, even though up to 25% of the wine may be made from another grape variety, such as petite syrah.